On January 20th, the University of Colorado Denver’s College of Arts and Media had the honor of welcoming the CEO of AEG Live Rocky Mountains, Mr. Chuck Morris for an interview and discussion attended by staff and students. AEG Is a major concert promotion company with branches all over the world. Chuck Morris has an inspiring life story of working hard to establish a music community in Denver. The Denver area’s live concert scene is flourishing presently and AEG live is the largest concert promotion company in the city and surrounding metro area; putting on an average of 800 shows per year. Although sometimes the Denver concert scene’s history can seem pretty obscure, the truth is that Denver’s music scene wasn’t always as intensely promoted with live touring acts as it is today. Today’s concert network in Denver supports a large number of venues, small to large and welcomes national touring acts every weekend on average. Denver’s concert industry has become a hot spot for tourists and natives alike, bringing together people from all walks of life to enjoy music and entertainment. These venues all had to start somewhere, and Chuck Morris’s story is an integrated part of many of these venue’s history as well as Colorado’s live music history. Interviewed by Colorado music hall of fame member and music business Professor for the College of Arts and Media Chris Daniels, Chuck Morris was happy to share his story with those in attendance. Morris started his academic career by going to school for a political science degree. After two years in a master’s program, he hitchhiked to Boulder, Colorado where he turned to music and managed a small bar called ‘The Sink’ on ‘The Hill’ in Boulder, a popular college town hotspot. It was here that he learned some skills and knowledge in the music industry and partnered with Don Strasburg, all while keeping the juke box in the bar playing every night. Morris and Strasburg started an underground radio station that would eventually become Colorado’s major radio station named ‘KBCO’. At this point in his career, he met and helped promoted the future mega rock band ‘The Eagles’ among other large touring acts. He started his own club that was catching serious traction with huge acts performing regularly including ‘The Eagles’; and Morris started to establish himself and his name in the live music business. This caught attention of Live Nation promoter Barry Fay, of whom Morris had wanted to partner with previously. After partnering with Fay, Morris shifted his focus to managing live acts himself. Eventually, however, Fay started retiring and so Morris got back into promotion.

After his partnership with Fay flourished with Morris eventually taking the reins of the business, Morris worked directly with Bill Graham of San Francisco’s concert promoter and pioneer as well to create a new concert promotion company. This company would be sold to Bob Silverman to become SFX, and eventually became Clear Channel Entertainment Group. This company is now known as Live nation. A short time into the Live Nation switch, Morris accepted an offer to work with Phil Anschutz and helped establish AEG Live Rocky Mountains. Since this move, Denver’s music scene has transformed with the majority of venues being owned by Anschutz. One thing Morris was adamant about in the interview is that “You just can’t replace live music.” (Morris) I think it is safe to say that he is right …the concert industry has grown to become a 9 billion dollar- a year business. The live music industry has become the lifeline of bands and artists amid the digital music sale meltdown of the 21st century and it is good to know that the music industry as a whole is still healthy, alive and well. Morris’s story has become a huge part of the history of live music in Colorado and his story demonstrates that anyone can start small and go on to do great things with enough hard work, vision and purpose. 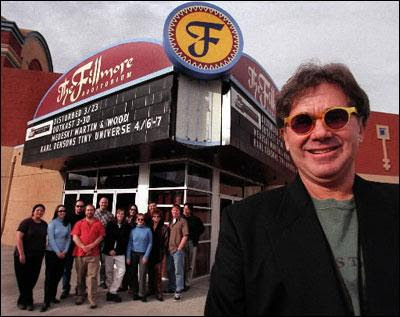